Sheila came into Torey Hayden's class for "special children" at the age of 6 after having tied a 3-year-old child to a tree and critically burned him.

ONE CHILD is Torey Hayden's story of her attempt to tap the unbelievable capacity of this tortured child.

Whatever your reaction, I think you will agree that it has been a long time since you have read a book with the sheer emotional impact of ONE CHILD.

ONE CHILD is Torey's first book and it was the first thing she ever submitted for publication.  The story itself was written very quickly - only eight days from start to finish.

It took only 42 days from the time she started writing ONE CHILD until she signed a contract with G.P. Putnam's Sons to publish it.

Where are they now? 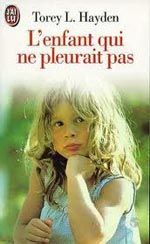 Sheila is now in her thirties. She has moved from fast food into the restaurant business and seems to have quite an astute business mind. She remains single and shares her home with two dogs and two cats. Animal rights has become an important cause in her life and she devotes a considerable amount of free time to this work.

Sheila was asked to contribute a word to this page but she has declined. Her privacy is very important to her and she feels that she wants to do nothing to jeopardize her current life.  However, she does extend greetings to everyone and thanks them for their interest and says to tell everyone she is now happy.

Anton is now in his early fifties. He is married and father of two grown sons. He gained first a bachelor's degree in education and latterly a master's degree in special education with emphasis on mental handicap.

Anton has recently celebrated his 20th year of teaching. He currently lives in California where he works in a special education program for Hispanic migrant children.

Whenever I re-read ONE CHILD, I always think the real success story was me. My life changed in those months as much as Sheila's. I'm quite certain my life would never be what it is today if I had not taken that form over to that school that day and met Torey and the class.

I want to take this chance to tell everyone that if you've got dreams, do the work to make them come true. It's worth it. But just as important, I want to say to the people who haven't got dreams, keep yourself open. I didn't have dreams when I walked into Torey's classroom. What happened that year just happened. I wouldn't have ever believed on that day I would be sitting here writing this to you now. Keep yourself open to dreams. You never know where you will find them.

Whitney is now in her early forties. She holds a doctorate in child psychology and has worked for many years as a private clinician.

That was a special year. It was the combination I think of Torey and 'Anton' and me all being interested in the same thing and getting to spend that year with a group of really special children. We all came away from it changed people and although we have gone our separate ways in life, we have all remained connected through our experiences that year.

My best wishes on this web site. I hope everyone who visits it enjoys it and comes away with a new appreciation for how meaningful life with these children can be.

Of the other children in the class, all are in their thirties. Freddie and Susannah Joy are unable to live independently or maintain jobs. Consequently both now live in institutional settings. Sarah and William eventually made the transition to regular education and graduated from high school. Sarah is now married, mother of three children and working as a waitress. William has become an accountant. Peter died from his neurological condition four years after ONE CHILD was written. Tyler died about eight years ago in a car accident.. Torey has lost track of Guillermo and Max.

Chad, now in his fifties, is married and father of a son and three daughters, the eldest of whom is named Sheila. He is still working as a lawyer.

See Also  -  THE TIGER'S CHILD
Torey Hayden returns with a deeply-moving sequel to her first book, ONE CHILD.
and Sheila's poem