BACK  THE BOOKS  NEXT 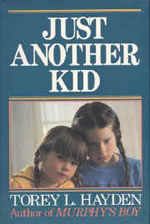 And if the six small boys and girls are not enough, a disordered parent arrives on the scene. She is Ladbrooke, mother of autistic Leslie, formidably elegant, seductive, bristling with beauty, but also alcoholic, promiscuous and speechlessly hostile.

The core of this story is Ladbrooke's and Torey's developing friendship, reminding us that love takes many forms.  Ladbrooke wants to be "just another kid" in the class.  The colloquial title signals the moral of this book: life is most fully realized while relating to and engaging others.  And this remarkable teacher's memoir convinces the reader that one of the most demanding jobs in education, a task not long ago dismissed as hopeless, may be richly and creatively rewarding.
New York Times Book Review

Torey didn't set out to write about Ladbrooke in JUST ANOTHER KID.  She only intended to write about the children and include Ladbrooke only in her capacity as aide in the classroom. But as the book progressed, Torey was surprised to find it had become Ladbrooke's story.

Alarmed that her publishers might not like this deviation from the synopsis they'd purchased, she mailed the 250-page uncompleted manuscript in a panic to her editor over Christmas that year to find out if she should proceed. Fortunately, everyone liked the "story that wrote itself".

Where are they now?

Dirkie is now in his thirties.  He has been unable to live independently, so is now in sheltered living, which also provides him with employment.

Torey has lost track of Mariana.

Leslie is in her late twenties.  She has developed well, although she is still severely autistic, and this has meant that she can not live independently.  Consequently, she remains at home with Tom.  But she has adjusted well and enjoys life. Tom has remarried.

Torey has lost track of Geraldine, other than knowing she is still in Northern Ireland.

Shamie is now in his thirties. He has returned to live in Northern Ireland and works there as a civil servant. He sends the following message to readers:

Hello, this Shamie from JUST ANOTHER KID.

I am honoured to be asked to contribute to Torey's web site.  That was a very special year in my life.  I was so confused and upset when I came into Torey's class and it was an extraordinary place of calm and acceptance.  I don't think I could have come home again to Belfast, if I'd not had the opportunity to grow in safety that year.    I want to give encouragement to anyone else who might be feeling lonely, isolated or upset.  It's important to know there are people in the world who care.  I had the chance to experience that.  I hope others do to. Keep trying. Keep looking. It's worth it.

Shemona is now in her twenties. She has remained in the US. She has been working in public relations but recently switched to teaching. She sends this message to readers:

Hi. I'm just writing to let you all know that I'm doing fine and I'm settled into a pretty good life. I got my master's degree in education. I didn't last very long as a teacher, I'm afraid. It wasn't for me. So I'm working now in a textbook company developing materials for classrooms. I got married to my boyfriend four years ago and now we have a daughter named Rosheen who is two and a half. And I still have my other baby, Ronnie [the Burmese kitten] I guess that's all.

Ladbrooke has returned to doing research. She and her second husband divorced several years ago. She and Torey remain close friends.

Originally I didn't want to write anything for this. When Torey asked me it felt like an invasion of my privacy in a strange sort of way, like admitting all over again, only in public this time, how bad things had been that year for me, so I said to her, just send my good wishes. But I lurked on the message board often, but mostly I kept coming back to "our" page here and re-reading it because it made me feel like being back in that year, which wasn't really a good year because it was a hard year, but you know what I mean. I probably have it memorized. I keep reading what 'Shamie' and 'Shemona' wrote and I keep thinking, "I want to be there too." I want to be recognized as part of that class, because it really was "my" class too.

It's hard to write something new. Like I said before I haven't always been a happy camper. Everyone else Torey has asked to put messages on her book pages sound like they've really gotten their lives together, and that's cool. I'm still struggling quite a bit, and it isn't easy to admit that, even all these years later. But that's how the cookie crumbles.

So I guess like I said before, if I have any message to the people reading these books, it's about how important it is to 'hang in there', how important it is to take a chance on things that are different and hard, on ways of thinking that you're not used to, how important 'connectivity' is, because we're all sort of separate and it's only when we care about each other that we're whole. Torey had one really favorite phrase with me, one that I haven't seen her put in any of her books, and I think it sums up what went on between all of us during the healing process. Every time things got bad, life felt like crap and I definitely didn't think I was going to manage the next move, Torey'd always say, "Yeah, it's hard. It's really, really hard. But 'hard' is not 'impossible'." I think that's cool. I still think that's a cool way to look at things and I'm still trying to be that way, day by day..

BACK  THE BOOKS  NEXT